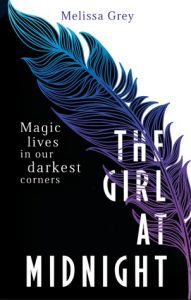 A book I wanted so badly to love, but in the end could not. The Girl At Midnight has all the elements of both a great book and a YA cliché train-wreck. Though it doesn’t quite end up at either end of the spectrum the reliance on tropes, overly wordy dialogue and poor pacing left me frustrated and disappointed.

The story follows Echo, a young girl who lives secretly in a library and has grown up half in the human world and half in a world of fantastical bird creatures that exists just below the surface of our own. Her adoptive race has been at war with their mortal enemies, a race of dragon-esque beings for time immemorial, but a chance encounter with an ancient object throws Echo into the middle of the conflict. In true YA fantasy style, she may be the only one with the power to stop the war once and for all, or she’ll lose herself trying.

The novel gets off to a great start with some of the most beautiful quotes about the power of books to help those on the outside feel safe and special I’ve read. That power really is one of the most wonderful things about stories, they transport us away from the world around us which is sometimes cruel or sad, and take us to places where we can be something more than we ever dreamed.

Despite these beautiful quotes at the beginning and a few scattered references to obscure words that perfectly describe a particular feeling or experience, there is very little to show of our protagonist Echo’s love of books. I think an opportunity was missed to be self referential and have her learn from the books she has read in trying to overcome the challenges she faces. It felt a little like there were two versions of her which weren’t communicating, the version who wrapped herself up in books -almost literally by living in a library – and the version who seemed very out of her depth in a fantastical scenario. For all I disparaged Cassandra Clare’s Infernal Devices trilogy it is a good example of having a character draw on the experiences of other fictional characters and historical figures to help navigate problems. Yes there are some funny/snarky uses of references to Lord of the Rings, Oliver Twist and other classic novels, but I didn’t feel that they really built up much of Echo’s actual character.

There were moments of brilliance when it came to dialogue, where everything worked and felt smooth. In particular I loved this exchange early on in the book:
“One cannot have light without darkness to temper it.”
“Simmer down, Socrates, it’s just a cookie.”
Though they are actually talking about baked goods, the comment about light and dark could have become so much more significant in the scheme of the plot, but it remains a throw-away moment.

Overall I felt that the book was unnecessarily dialogue heavy. This is closely linked to the issues that I had with pacing. Because of the long, wordy dialogue exchanges it felt like the plot was taking forever to get going, and scenes went on for pages and pages. But at the same time the action seemed to jump around, with scenes moving past so quickly there was hardly time to absorb their significance. This made the plot progression feel rushed and staged.

My final word on the pacing is the timeline. The entire novel, with the exception of the childhood scene at the beginning, takes place over the course of (by my best estimate) less than a week, the first half of the book in less than 2 days. This timespan makes no sense when trying to understand the complexity of what is occurring around Echo. It doesn’t give the characters a reasonable or believable timespan to grow, mature and learn, or to get to know eachother. Leading to what I can only dub ‘insta-gang’ like the dreaded ‘insta-love’ but a bond between a group of ‘comrades’ who have been thrown together by chance. I could have believed that a group so prejudiced might learn to trust eachother over weeks or months of comraderie, but after only hours had passed it was a bridge to far for my suspension of disbelief.

My favourite character in this novel was Dorian, a side character, who definitely deserved more prominence. Despite the relatively small amount of attention he receives I found his character arc to be the most complex and thoughtful. If I do end up reading the sequel, which is unlikely at this stage, it would be to read more about Dorian, because Echo was utterly forgettable and swept up into the whirlpool of ‘typical YA heroines’.

Suitable for ages 13 and up, some mild language and vague sexual references.

Already read the book & want to continue the discussion? Check out the Babbling Book Club discussion.

Favourite quotes about books:
“Sometimes,” the Ala said, “when I’m feeling sad, I like to be around all these books. They’re very good at making you forget your troubles. It’s like having a million friends, wrapped in paper and scrawled in ink.”

“The library was her home. Books didn’t give her dirty looks or whisper snide comments under their breath. Books didn’t judge… These books were her family, her teachers, her companions. They had remained loyal to her, so she would remain loyal to them.”