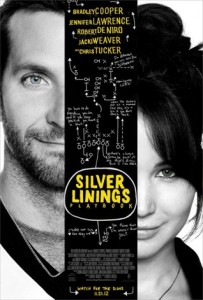 A poignant tale about love, friendship and family, through the eyes of a man struggling to piece his life, and his mind, back together. I read this novel in a single day, the first person narrative was incredibly engaging and the story really drew me in. For those of you who have seen the movie as I had before picking up the book, it was a faithful adaptation for the most part, but placed the emphasis on different pieces of the story.

Protagonist Pat Peoples’ tale begins on the day of his release from ‘the bad place’ where he has been recovering from a mental breakdown of some kind. Because the novel is written as though to a diary Pat rarely speaks directly about why he was in ‘the bad place’ and indeed for the majority of the novel he blocks all memory of what led to that situation. His goal is clear: reunite with his wife Nikki. The title of the first chapter is ‘An infinite amount of days until my inevitable reunion with Nikki’ and she continues to be the focus of his obsession throughout the novel. His perception of himself, his actions and the actions of his friends and family are all filtered through the lens of the fictional reality he has created for himself, a reality where his separation from his wife is only temporary. This makes for fascinating reading, as readers guess at the truth through the distorted versions of events Pat provides.

There was a lot to enjoy about this novel, the narrative voice is so clear and strong that you really feel for Pat as he struggles to come to terms with reality. I found the pace very quick, despite the sometimes heavy subject matter, and was unable to put it down at times. The story focuses more on Pat’s relationship (both real and imagined) with his wife, and with his parents than it does on the friendship with Tiffany –played by Jennifer Lawrence in the film. In fact the novel focuses more on Pat’s friendship with his therapist then it does on Tiffany for the majority of the book. To me, this was perfect for the plot, it made Pat’s struggles more believable to see that he was unaware of any romantic interest when he was so focused on his wife.

I will admit that a lot of the ‘playbook’ elements of the story were a bit over my head. I don’t know anything about American football, and didn’t realise that ‘playbook’ in the title referred to football ‘plays’ until I finished the novel. But I don’t think that really impacted my enjoyment. Football is used as a way for Pat to reconnect with his father, brother and friends, and I can understand the camaraderie and passion that sports fans have for their teams regardless of my understanding of the actual mechanics of the particular game. In particular the rituals, such as singing the team song and watching the games at home or in the stadium, gave the book a really touching ‘grounded’ feeling, like readers are looking into the window of someone’s everyday life.

First person narratives are often a challenge for me to really whole heartedly love, and this was no exception. While I enjoyed being immersed in Pat’s unique world-view and all the amusing and touching situations which occurred because of it, many of the secondary characters lacked depth. Because Pat’s view of the world was so narrow, and he was having significant difficulty in understanding the feelings of others readers are left to guess what they can about other characters from the glimpses that Pat’s perspective allows. It’s not a book-ruining issue, as a whole the narrative works beautifully, it’s just a personal preference for being able to understand other characters more deeply.

Overall I really enjoyed this novel. I can easily see why it was chosen for film adaptation, as it is a really rich emotional story told from a unique perspective. I think I liked both the book and film equally, and would recommend it to lovers of adult contemporary novels; just don’t expect the same kind of focus on the love story that the film portrays.