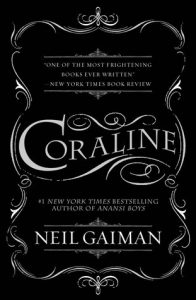 A delightfully dark tale for readers young and old. Coraline explores respect, family bonds, independence and bravery, with humour and moments that will have you checking your lights are definitely on!

There was so much to love about this little novel. The protagonist, Coraline, is at home during the Summer holidays and after exploring the new house she has moved to with her parents, she is bored. Her parents are busy working, and Coraline seems to be the last thing on their mind. She meets an odd assortment of elderly neighbours, but they are all lacking as holiday companions for a young girl. The most exciting thing is the door in one of the rooms which leads nowhere. But as Coraline discovers, there is more to this door than meets the eye. What it reveals will put her own life, and the lives of her parents in danger, and it’s up to Coraline alone to save the day.

Coraline is human. She is a real little girl who is generally good, but just a little petulant, and just a little bit selfish at times. She feels like grown-ups are living in a world of their own and overlooking or ignoring her most of the time. Because of this, I think she is a wonderful character for children to be reading about. She isn’t especially brave, or unique. She doesn’t have magic powers or incredible intelligence or anything else especially exceptional about her. But she does keep trying, and I think that quality is admirable. As Coraline says:

“When you’re scared but you still do it anyway, that’s brave.”

Much of Gaiman’s appeal as an author of stories for children is that he really does remember what it was like to be a child. The hopes and dreams and fears that lived in our hearts that have long since been buried for most adults. His writing isn’t written down to children, it is written to them. This is why his stories resonate with all ages, the children read a voice like their own, that knows their truths, and adults read a voice that resonates with a part of themselves which is buried but not altogether lost.

If you’re an adult wanting to reconnect with the child inside you who is just brave enough to scurry down dark corridors at night Coraline is just the book for you. If you have a child in your life who likes their stories to delve into dark places and come out stronger for it then this is a book for them too.

Suitable for ages 8 and up.