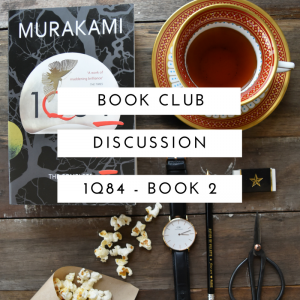 Let’s discuss Book 2 of 1Q84! Read through my discussion prompts below, then add your thoughts on those or anything else you felt was important to you. Feel free to ask a question for me (or other book club buddies) to answer. And remember to check back to see if people have replied to your comments.

**WARNING** The discussion prompts and comments below will contain spoilers for 1Q84 Book 1 and Book 2. Only continue if you have read book 1 & 2!) And if you have read further please limit your responses to content covered in book 1 & 2.

Murakami is combining both sci-fi and fantasy elements throughout 1Q84, can you think of any examples of other writers who do this within their stories?

I’m sure that this is a common thing to occur in literature, and yet I can only think of a few examples myself. Last month’s book club read ‘The Sudden Appearance of Hope’ did, and some of Stephen King’s stories blend sci-fi and the paranormal or supernatural. I am enjoying the ‘loose’ nature of blending the two. It makes the plot far more ambiguous where it is not clear if the story is a fantasy, or a scientific/futuristic story with established parallel dimension tropes.

Are there any internal conflicts characters are experiencing which you have noticed?

Many characters in 1Q84 seem to be passionate about reading/learning, and seek to understand the complex (and occasionally bizarre) things which are occurring around them but this is often counter balanced by rather extreme lassitude. Tengo for example is clearly very intelligent, he teaches mathematics and writes in his spare time. He also appears to read very widely, and once he has a topic in mind researches it thoroughly. However he also seems to pass huge amounts of time doing virtually nothing and ignoring some of the ‘problems’ which are stacking up around him. I have found this contrast fascinating.

“Aomame did not want to die ignorant, failing to grasp how things worked.”

How do you feel about Tamaru?

The more I learn about Tamaru and his backstory the more I love him. I think that he, like Aomame is a very strong character with a very specific moral code that he lives by. It is clear how he has been shaped by his past, and his vulnerability in revealing his history to Aomame was one of the loveliest moments of trust and a strange kind of friendship in this book, for me.

“Tamaru is a man who keeps his word. He might kill you without hesitation if necessary, but even so, he would care for your rubber plant to the end.”

The moon features heavily in 1Q84, why do you think that is?

I’m going to let you folks answer this one, as I’m not sure I know myself! My only theory is that the moon features in many Japanese folktales, and is generally considered around the world to be mystical and mysterious.

“The moon was as taciturn as ever. But it was no longer alone.”

Did you have a favourite quote from Book 1 or 2?

Mine was: “There is nothing in this world which never takes a step outside a person’s heart.”

I loved this poetic expression of the thought that you can’t help but express in some way the things which you treasure and love.

Look forward to hearing your thoughts, and to reading the final section! Don’t forget to use #babblingbookclub if you are posting photos on Instagram, all my favourites are featured on the Babbling Book Club account!