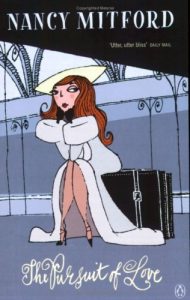 3.5 stars, for a book I neither loved nor loathed, but can appreciate. The Pursuit of Love is a wildly over-the-top tale of the love affairs and the lives of an aristocratic family in the 1920s and 30s. What I wish I had known before beginning was that this story is a satire of Mitford’s own family, who were almost as eccentric as the Radletts of this book, and certainly just as much in the public eye.

“Always either on a peak of happiness or drowning in black waters of despair they loved or they loathed, they lived in a world of superlatives.”

The story follows Linda, the most extreme and exaggerated of the five Radlett children, in her pursuit of love. It begins with her as a young girl innocently learning about love and yearning for it, and ends with a grown woman whose madcap adventures as a result of disastrous love are presumably intended to be hilarious. The narrator is her cousin, which leads to some rather odd situations and diversions onto different topics that don’t really relate to Linda throughout the novel.

Perhaps because of the era, it reminded me of Brideshead Revisited but without the brooding gloom of decline that hovers just above that narrative. The Pursuit of Love seems to poke fun at a class who has already lost their relevance in a world of ‘capitalists’, but just hasn’t noticed yet.

I think this book would be far more enjoyable if you know something of Nancy Mitford and her family. Satire loses its edge when readers miss the events or people to which it is alluding. I found the character of Linda’s father bizarre, but in researching discovered that many of his mannerisms and habits were lifted directly from Mitford’s own father, which completely changes my perception of him as a character in this novel.

Overall I did find it an entertaining, light read, and I really enjoyed some of the reflections on the era between the two World Wars. But ultimately because of my lack of knowledge of what Mitford is satirizing much of the book went ‘over my head’ and I feel I missed much of the humour. If I am to read any more Mitford novels I’ll definitely be doing my homework first!