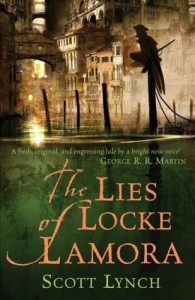 The Lies of Locke Lamora is ‘locked’ into place as one of my all-time favourite fantasy novels after my reread in March 2016. The first book in the Gentleman Bastard Sequence has always held a special place in my heart. Before my re-read the characters still burned brightly in my memory even though it had been 8 years since I first met them. What I love most is Lynch’s special blend of dark humour, frequent violence, foul language, complex world building, and ability to create characters that feel like family before the book is done.

‘Jean’ said Locke, ‘you are a greater friend than I ever could have imagined before I met you; I owe you my life too many times over to count. I would rather be dead myself than lose you. Not just because you are all that I have left.’

This novel is 530 pages of intrigue, crime, brotherhood and, shattered hopes. The story follows Locke Lamora, an orphan who has been making a living picking pockets on the streets of unforgiving Camorr – a fantasy city with faint echoes of renaissance Venice. Locke becomes swept up into an apprenticeship of sorts in the priesthood of the ‘Nameless Thirteenth’, the god of thieves. The timeline jumps between Locke’s early years training, failing, tricking, and atoning, and the ‘present’ where, in his early twenties, he is embarking on one of his most ambitious cons. Think Ocean’s Eleven mixed with Robin Hood, heavy on the crime and banter between ‘brothers’ and light on the morals.

‘He was wise enough to know that the women of Camorr could be underestimated only at great peril to one’s health.’

There is so much to love about this novel. But I must mention my special love for the various ‘interludes’ that punctuate the narrative. Some are flashbacks to the training or childhood of the Gentleman Bastards, while others explore the history and politics of the world Lynch has created. A particular favourite of mine charts a famous rebellion of the ‘whores of Camorr’ which helps to define the social structure of the city’s underworld. It seems like a simple little addition to the history of the city, but there are a couple of lines within it which set up darkly ironic situations later in the book as a reward for observant readers.

‘What knife is this?’ Locke held a rounded buttering utensil up for Chains’ inspection. ‘It’s all wrong. You couldn’t kill anyone with this.’

No one knows how to toy with my emotions quite like Scott Lynch, and it’s been a long time since a book has made me cry so hard (especially one I have read before, and know what is coming). There is hope, rage, and one of my favourite book bro-mances to keep you emotions on edge.

Locke’s policy to ‘never stop talking’ is one of my favourite parts of the book, it was endlessly amusing to be tickled with surprise and mirth at Locke’s snappy comebacks and wry humour no matter the situation. But despite this, and his beautiful friendship with Jean, Locke remains mostly an enigma throughout the novel. I would really have liked to see a little more depth in his character, and some evidence that he really has learnt from his early mistakes. That said, this is the first book in a long series, so the slow character development is not a deal breaker overall.

I enjoyed the world-building throughout, and the backstories and history were even more interesting the second time around, as I wasn’t in such a hurry to rush through to find out how various heists would be resolved. The history and cultural descriptions can be quite overwhelming in places, and in some cases not entirely necessary to the plot, but they do build up a rich tapestry for all the action.

The constant interplay between knife-edge tension, violent outburst, and humour was for me the highlight of this book. The simmering tension throughout, broken by bubbles of laughter I couldn’t suppress, made this one of the most memorable and entertaining reads in the fantasy genre that I have come across, and very much deserving of its place on my favourites shelf.

*Final note on age appropriateness*
This book is definitely suited to ages 18 and above, or mature readers aged 17. The violence is very graphic, including torture, murder & execution, and I can’t stress enough language is incredibly coarse on every page, not just occasionally. Not a YA book by any measure, this is to be approached with caution if you are a younger reader or concerned about violence/swearing. None of these things diminished my enjoyment of the book, but it is something that readers should be aware of.