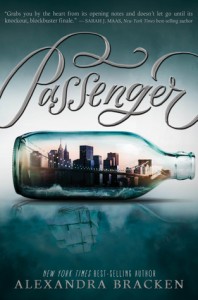 Adequate. When that’s the best word you can think of to describe a novel you know you haven’t enjoyed it.

Passenger had all the building blocks of a great story. Our protagonist was a supposedly passionate, talented musician, a teenage girl who had sacrificed a lot for something she loved. She has a troubled relationship with her mysterious mother and strong mentor figure in her music teacher. There is an interesting take on the time-travel tropes with a society of travellers mapping and controlling ‘gates’ between years and locations. There is even a love interest with a past beset by challenges, born the child of a slave and her master in 1700’s America, and adopted into a life of ‘legal’ piracy on the high seas.

There are so many great elements to this story, but they just don’t fit together to create a compelling whole. Etta’s relationships with her mother and mentor are one dimensional, the time travel feels caricatured (what could be more cliché than London during the blitz?), and the passion for music evaporates 25 pages in. Don’t get me started on the section in Damascus, a romantacized section that could have been lifted from ‘Arabian Nights’ and the only character they really meet and speak to leaps from vehement ‘cultural’ sexism to openly acknowledging and accepting an unmarried couple sleeping together in the space of a dozen pages.

But more than anything else, this story felt like it was hard to write. Reading it felt like every word in every sentence in every paragraph had been laboured over. There was no joy or pleasure to be had, no lightness or whimsy. I’m not saying there aren’t jokes or humour, because there is, but there was no joy to be had in the telling of this story and it held this book back like an anchor trapped way down deep.

I just couldn’t find anything to love in this story, and probably wouldn’t have finished it if I wasn’t reading it alongside Nikki from Alice.in.Wonderbookland. I think it’s a terrific example of excellent marketing by the publisher. I saw (and still do) this novel everywhere on my social media feeds, but hardly anyone initially had read the book, and later hardly anyone had purchased it because so many –myself included- received free copies. I will be very surprised if this novel, and series, goes on to be hugely popular. I certainly won’t be picking up the next book when it is released.

Overall it was an interesting take on the time-travel mechanic but unfortunately I was so disappointed by the delivery that nothing could redeem it. I’m sure that there are many out there for whom the love story will be enough to get through the flat spots, and who will fall in love with Etta or Nicholas, but I’m not one of those.