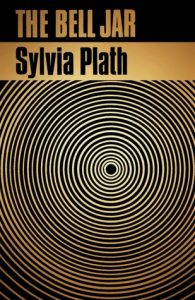 The Bell Jar surprised me, it was so cutting, so wise, and so sad. The observations about people and about society are so razor sharp, many of them still feel fresh even today, 65 years after they were first published.

A thousand and one reviewers have summarised this story more sagely than I can, but in essence it is a book about a young woman who is struggling to find her place in the world and within herself. She pushes up against the conventions of society and the world around her cannot understand her. All of these struggles are seen through the lens of the Depression she also struggles with.

One thing I do want to note before I share some of my favourite passages is the racism in the book. It’s not frequent, but it is present and delivered in such a casual manner it was really jarring and uncomfortable.

The vivid way that she describes her depression are particularly moving when you realise how closely they reflect her own life, and the tragic way it ended.

“I felt very still and empty, the way the eye of a tornado must feel, moving dully along in the middle of the surrounding hullabaloo.”

It was interesting to see feminist attitudes, around the role of women at work and in marriage, and about being an independent, autonomous person.

“That’s one of the reasons I never wanted to get married. The last thing I wanted was infinite security and to be the place an arrow shoots off from. I wanted change and excitement and to shoot off in all directions myself, like the colored arrows from a Fourth of July rocket.”

My favourite quote from the book is a long one, but it really moved me. It’s such a perfect way of describing a feeling I have had so many times in my life, a paralysing, crushing feeling, where limitless potential comes crashing down into hopeless, listless indecision.

“I saw my life branching out before me like the green fig tree in the story. From the tip of every branch, like a fat purple fig, a wonderful future beckoned and winked… I saw myself sitting in the crotch of this fig tree, starving to death, just because I couldn’t make up my mind which of the figs I would choose. I wanted each and every one of them, but choosing one meant losing all the rest, and, as I sat there, unable to decide, the figs began to wrinkle and go black, and, one by one, they plopped to the ground at my feet.”