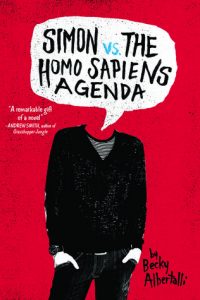 4.5 stars. A sweet story about teen issues, told in a voice that feels authentic, & that you can’t help but love. The story covers sexuality, identity, friendship, alcohol, bullying & family, but somehow this manages not to be an ‘issues’ book.

Simon is 16, in the closet & being blackmailed. Forgetting to log out of your email account on a school library computer is annoying and potentially embarrassing. When you’re conducting a secret email correspondence about your sexuality that a not-quite-friend decides to use as leverage to get his way it down right disastrous.

Simon might not be a perfect friend, brother or son, but I’d still love to have him by my side.

Simon grapples with his own prejudices and the assumptions he makes about his friends, the world around him, and struggles through many of the arguments around diversity and representation we are seeing in the YA publishing scene at the moment.

“Then he smiles and I smile. And then I blush and he lowers his eyes, and it’s like an entire pantomime of nervous gestures.”

Becky Albertalli seems to have a direct line to the teenage psyche. I was transported back to my awkward 15 year old self, trying to work up the courage to express how I felt to a boy who had captured my imagination. Some of the moments are cheek-achingly adorable and I just couldn’t stop myself from smiling happily at Simon’s crush-focused moments.

“People really are life houses with vast rooms and tiny windows. And maybe that’s a good thing, the way we never stop surprising each other.”

Simon’s relationships with his parents and his sister were a huge part of why I loved this book so much. His assertion that “If she thinks me drinking coffee is big news, it’s going to be quite a fucking morning” before he comes out to his family really put things into a relatable and domestic setting. So many parents seem to have the innate ability to turn every moment into something to be scrutinized, and though that is sometimes done in a positive and supportive way, the spotlight can easily make teens very uncomfortable. I think Albertalli does a brilliant job of portraying this family dynamic without exaggerating it to the point of forced comedy.

The inclusion of Simon’s struggle to deal with his dad’s inappropriate jokes was important: “Nothing is worse than the secret humiliation of being insulted by proxy”. There just aren’t enough parents in YA novels who are flawed humans, but genuine in their love for their kids, and Simon’s dad is such a great character to remedy this shortage.

“He talked about the ocean between people. And how the whole point of everything is to find a shore worth swimming to” is just the kind of sentiment that would have enthralled me as a teen. I would have scrawled it in journals, made art with it as the central theme, and I would have repeated it over and over until it meant everything and nothing. I might not do the same now, but reading about a character who these ideas are new for, and who embraces them with the kind of zest I would have is so compelling.

And last but not least, this book is SO quotable! One of my favourite, insightful, quotes is:
“Being secure in your masculinity isn’t the same as being straight”

If you are trying to read more diverse books and are looking for something that focuses on teen sexuality and coming-out then Simon Vs the Homo Sapiens Agenda is an excellent choice. If you are looking for a Young Adult Contemporary which will make you smile until your cheeks hurt then Simon is most definitely for you.

Suitable for teen and up – minor warning for some infrequent strong language.

To share my love of this novel I created an original watercolour artwork of the cover. If you would like to win it all you have to do is Let me know in the comments below what your favourite diverse read is any why I should read it. Also please leave your email address, instagram account name or other way I can contact you if you win.

Giveaway is open internationally and I will post the card from my next destination.