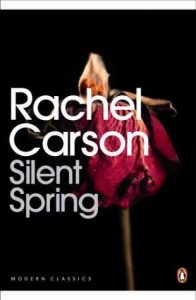 It’s not often you read a book that had as much impact on the world as Silent Spring. Carson’s direct and unambiguous criticism of pesticide use in America led to significant changes in public policy and was a key part of forming the modern day environmental movement.

Before Silent Spring most public dialogue about the environment was framed in terms of conservation. Habitats were to be preserved through initiatives like national parks, and endangered species nurtured in zoos. Carson’s narrative instead moved nature to the forefront of conversation, highlighting the ways in which in-discriminant pesticide use impacted not only the environment where conservation was or should be taking place, but also farms, suburban streets, backyards, communities and individual people.

One rather fascinating element of my edition was the Introduction by Lord Shackleton, presumably to help British readers understand that the problems outlined in America also applied to them. He is strongly supportive of Carson’s message, but most of all I enjoyed his rather paternal dig at dissenters that could equally be applied to climate change deniers in the modern day:

”I would ask those who find parts of this book not to their taste or consider that they can refute some of the arguments to see the picture as a whole. We are dealing with dangerous things and it may be too late to wait for positive evidence of danger.”

While Silent Spring is an important book I think reading an edition with a modern foreword or afterword is essential. My Penguin Modern Classics contains an afterword by Linda Lear written in 1998 which was helpful in putting Carson’s work into context – but a more recent interpretation would be preferable. I was interested, and saddened to hear that Carson’s gender was the basis on which much of her work was criticized. Some of the science Carson cites and conclusions she draws have over time been proved false. However the principle of her argument remains as relevant today as it was in the 1960’s when this book was first published.

It is certainly not going to be a book that I recommend widely – it is a rather niche area of interest. But it really is a book that changed the course of history, and a terrific example of how one voice (and a woman’s at that) filled with conviction and backed with evidence can tap into a significant issue and bring about change.