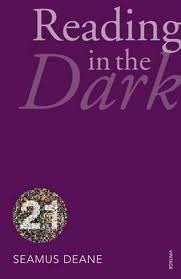 Haunting tale of a family twisted by secrets and a society in conflict with itself. Set in Ireland in the 1940s and 50s Reading in the Dark follows a young, unnamed, Catholic boy growing up during one of the many periods of violent conflict between the Protestant and Catholic communities.

The Derry of this tale is a dark place, deeply divided and filled with fear. There is little trust between friends or even family members and secrets are tearing everyone apart. So much of the story is about those secrets, and the way they can twist relationships and people, rotting them from the inside out, poisoning people against eachother, spouse against spouse, parent against child, and children against siblings.

Deane also weaves in the legends of Ireland. Ghosts haunt people, fairies linger, dreams take on lives of their own, and echoes of long forgotten warriors remain in the land.

The story is dark, and not at all happy. There is so much tension and betrayal, so much fear and sadness, that it is not a happy read. But in many ways it is still an enjoyable one. The way Deane writes is so vivid, with unusual descriptions which perfectly evoke a particular mood or moment. I wasn’t at all surprise to find that he was a poet of renown, because there is a lyrical quality to the writing the leans towards poetry in parts.

I loved this book for its atmosphere. I felt tossed onto the streets of Derry, violence simmering just below the surface of every interaction.

My only real criticism of it is how misleading the blurb of my edition was. It spoke of a young boy living half in a fantasy world via his dreams and half in the world of conflict and lies he physically inhabited. It suggested that these two worlds were on a collision course. But in reality that is only vaguely true of the first section of the book and in no way encapsulates the domestic focus of this tale.