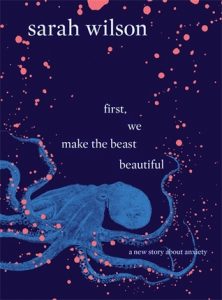 Pitched as a ‘new story about’ anxiety, this underwhelming book has moments of cut-through which are almost lost in celebrity name-dropping and privileged advice. There are the seeds of interesting ideas within the narrative, but each time one is approached the strangely stilted structure interferes. The chance to genuinely engage with anxiety in a new way is lost.

Sarah Wilson is a journalist/tv presenter best known for her many books about quitting sugar. Her knowledge about and passion for topics of nutrition is abundantly clear. The sections where she talks about her own health journey, her Hashimoto’s disease diagnosis and the multitude of ways in which what we eat impacts our mental health are the most compelling. But if you have read any of her other books – or like me, skimmed the odd article she has written on the topic occasionally – not much will be new to you.

This book attempts to blend memoir, research, and self-help around the central theme of anxiety. In some case this works well; I enjoyed reading about the concept of mental ‘space’ versus ‘time’, having a deep look into one person’s experience of anxiety connected some dots about my own experiences, and there were some terrific quotes from thinkers on various topics.

By all accounts Wilson’s struggle with anxiety has been, and continues to be, at the extreme end of the scale. She talks about her various suicidal moments, her autoimmune disease, and how anxiety has impacted every corner of her life. But having struggled is not the same as having something new to say, and by the end of the book I’d decided I simply was not the target market.

The most obnoxious parts of the book were the celebrity name dropping and the tone-deaf advice. Amongst the genuine suggestions that are accessible to most (though not all), like walk slowly, or meditate even if you don’t have the perfect peaceful circumstances, there were some woefully off-base ones like ‘have a think week, ‘live somewhere slow’ and the suggestions to train those around you by setting an aggressive out-of-office on your email account. Those suggestions might be fine if you have the means, or the job stability to do so, but for the majority of people they range from ill-advised at best to virtually impossible.

I can’t end this review without mentioning the awful editing. The structure of this book made no sense, the chapter titles further confused things, and the strange numbering system down the margins seemed completely arbitrary. There were whole sections which could have been rewritten in a single sentence. Memorably there was this line which combines dreadful editing and name-dropping:

“The Happiness Project’s Gretchin Rubin shared the trick with me over the phone during one of our chats. I think she refers to it on her blog or in one of her books, too.”
I own a copy of Rubin’s book and I have access to the internet. In less than 5 minutes I was able to confirm that she does indeed mention the ‘trick’ on her blog, more than once. Why was that sentence allowed to remain in the finished book? Aside from making it sound like the book was dashed off in a lunch break (which it wasn’t, given it took her over 2 years to write, and she discusses her process elsewhere), it also is not helpful for the reader, the direct opposite of what that section is supposed to achieve.

I am taking from First, We Make the Beast Beautiful some additional context around my own anxiety, and the identification of a few behaviours which are connected in ways I hadn’t realised. I’m also taking away reminders of what has worked for me in the past and will hopefully work in the future – a reminder to keep going, and it will always pass. On the flip side I won’t be picking up another book by Sarah Wilson, and I have an increased justification of my caution around ‘celebrity’ memoirs.