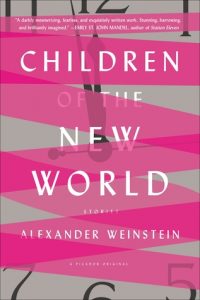 Just another straight-white-male sci-fi collection. Though I did finish all the stories, none of them really stood out to me as bringing anything new to the science fiction genre. There were an assortment of tales about artificial intelligence becoming part of the family, digital manipulation of memory, and a couple of post-apocalypse style settings.

This book has a strangely distant voice and feels deeply male-centric. Children of the New World was an interesting story but like all the others lacked any emotional depth. Which perhaps might be the point? That in a future where digital connectivity is the primary mode there is an absence of empathy? I toyed with this as an idea, but there was simply not enough depth in any of the stories for me the believe this idea with any conviction.

The stories all projected capitalist and patriarchal structures into the near future. These structures were generally critiqued but overall not really challenged in their fundamental inevitability. The protagonists are all male, presumably all white (though it is not specified), and all are ambivalent to the women in their lives. The only character with a race specified was an Indian child who is tagged as an ‘outsider’ and blasted into space in a bizarre sacrificial ritual.

Most disturbing to me was the representation of women throughout all the stories. Very few had names, none were the protagonist, and all existed to further the male lead’s story or to cast him in a sympathetic light.

They fell into three categories:
1. Sexual Object: These women existed for pleasure or titillation, had no personality and no name. They strongly desired the protagonist despite his ambivalence towards them.
2. The Wife. Little more than a footnote, wives existed in the stories to; provide for children, be argued with, and to fail to understand the depths of the protagonist’s suffering.
3. The wise hipster. These beautiful, enigmatic creatures were critical of authority, provided alternative insights or perspectives into the status quo, but ultimately were cut off by the protagonist when he failed to come around to their anti-authority perspective, or when they correctly interpreted his selfish behaviour as selfish. This loss is mourned in an abstract sense.

I have referred here to ‘the protagonist’ as a single character, though each of the stories ostensibly had a different lead, they were so bland and similar in attitude I honestly couldn’t tell them apart.

I feel like this book will, like many reviewers have mentioned, appeal to viewers of TV series Black Mirror. But so far it offers nothing new for fans of science fiction writing more broadly.