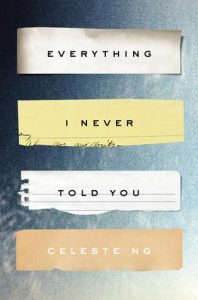 3.5 stars. A layered novel about all the secret lives families lead when they can’t or won’t communicate. The story focuses on a Chinese-American family in the 1970’s and the events before and after the death of the eldest daughter Lydia.

“And Lydia… she held the world together. She absorbed her parents’ dreams, quieting the reluctance that bubbled up within.”

This book is filled with frustration, hopelessness, miscommunication, and fear, and each of the characters, including Lydia who exists only in memories, deals with those emotions and challenges in different ways. Because the story is told from the perspective of each of Lydia’s parents as well as her older brother and younger sister it quickly becomes clear that no one in the family knows the full truth about Lydia’s life. On the surface it is a thriller or mystery story, as the family seeks to uncover what really happened the night Lydia drowned. But beneath that surface is a rather complex examination of family dynamics and experiences of racism across generations.

“Up there… everything on earth would be invisible. Mothers who disappeared, fathers who didn’t love you, kids who mocked you – everything would shrink to pinpoints and vanish. Up there: nothing but stars.”

For me the weakest part of this book was the relationship between Lydia’s parents, and her mother’s character in particular. I felt her hysteria and domination of her daughter were hard to swallow, though I liked the symmetry of repeating her own mother’s mistakes under a different guise.

“Dreaming of his future, he no longer heard all the things she did not say”

Nathan, Lydia’s brother was my favourite character. He had just enough chapters to develop as a character, and to show more clearly his motivations and fears. The strained dynamic between him and his father was well executed.

Overall I found this novel had some interesting insights into family dynamics and racism across generations, but it lacked some kind of spark to make me fall in love with it. Nathan was the only character I really cared about, and even then I wasn’t really convinced by the neat ending to his character arc.