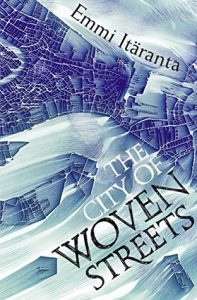 An enchanting tale of love and resistance. Unexpectedly tender and heartfelt, the story swept me away. Itaranta has crafted a world of intrigue that both defies and embraces the many dystopian tropes, weaving a story with a pattern quite unlike any other.

The synopsis describes the plot in barren terms. The protagonist Eliana is a young weaver in The House of Webs where a spider-like Goddess is worshiped, and she does meet a mysterious young woman who has had her tongue cut out and Eliana’s name tattooed on her skin. But the synopsis speaks of networks of power and a drowning city like those are the focus of the story. When it is Eliana’s internal struggles which are explored in most depth. Her developing relationship with the woman who cannot speak, the secrets she hides and the secrets she uncovers are the focus of the book. And throughout there are beautifully nuanced characters, most of them women.

“Our hours are brief and our days are brittle, and the marks our hands leave on the world belong to us…”

There is a wonderful dream-like quality to The City of Woven Streets, or The Weaver as it is known in the US. The regular chapters are occasionally interspersed with 2 pages of sentences which forgo regular punctuation and structure. They evoke the night-time or fever-induced visions of a wandering mind and help to build an atmosphere between fantasy and reality.

“The sky has begun to fade into the colours of smoke and roses.”

The writing evokes some rather startling images, eschewing cliché in favour of brief description that are so vivid I had to close my eyes for a moment just to let them sink in. Though the plot does drag a little at times, the mood and descriptions of the Island kept me floating along with the story.

“…we are pebbles on a wide and far-stretching shore, not the moon that will turn the tide”

The City of Woven Streets could easily have been a typical dystopian story, with a tyrannical government placing strange restrictions on the life of the population. Yet, through a combination of unusual language choices and focus on character it manages to avoid feeling tired.

“Only the wounds of the dead do not scar”

I really enjoyed this book, the first I have read by a Finnish writer. It has given me much to think about and the haunting image of the Island continue to linger in my mind.