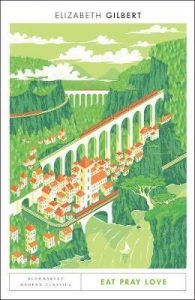 Painfully dated, directionless and self-indulgent. I hesitate to say that ‘Eat Pray Love’ is a product of its time, as it was published barely 12 years ago in 2006, but there is a clear line in the literary sand around language that this book crosses, and the whole structure of the narrative relies on the other-ing of the people in three different countries.

There are frequent ableist slurs used casually throughout the book, which I will not repeat here, but which are used by Gilbert to put herself down. It pulled me up short every time.

Beyond this the entire premise of the book rests on stereotypes about Italy, India and Indonesia (or rather, Bali in particular), which go largely examined or questioned by Gilbert. A well-off (read: wealthy enough to afford multiple houses in expensive parts of the US East Coast) white woman suffers through a drawn-out and difficult divorce, gets a book deal to travel for 12 months and ‘find herself’ in three ‘spiritually’ deep places. If that synopsis doesn’t make you cringe then perhaps this book might be for you, it certainly wasn’t for me.

The book is divided equally into three sections, just has her year was divided between the three countries. Italy is themed ‘eat’ and is filled with pasta, obsession with the ‘romantic’ origins of the Italian language, and soccer.

India was the most problematic section for me, though there is nothing ok about how either Italy or Indonesia were stereotyped. The description of what I would paraphrase as ‘happy impoverished women smashing rocks by the road and smiling at Gilbert as she passed’ is so firmly lodged in my mind as a vivid example of the pervasive colonialist mentality in this book.

The section that takes place in Bali was slightly easier to get through, mostly because it didn’t have pages and pages of descriptions of Gilbert’s struggle to meditate. It was however filled with painful stereotypes, from the ‘ancient medicine man’ to the various assumptions about corruption and scamming.

Every culture she drops herself amongst is observed, categorised and other-ed. And yet her place as the real intruder in these places is never questioned, her right to insert herself into these spaces is taken as a given and she proceeds with her selfish journey. Her one tangible act that has an impact is raising money to purchase a house for the healer she befriends. This however turns into an opportunity for Gilbert to demonstrate that she won’t be taken advantage of, lying to the healer to ‘do what is best for her’. The whole thing was ‘white saviour’ through and through.

I would not recommend this book. If you are interested in Gilbert’s work I much prefered her recent book Big Magic (though I had a couple of issues with that as well), I think her experiences in the last 10 year show. Unfortunately this just shows more clearly how dated Eat Pray Love is.