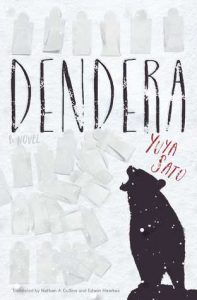 A strange, dark exploration of old-age, death, and womanhood.

“Of course there are no men! Why the hell would I want to save any men?”

Every character in Dendera is a woman over the age of 68, which in itself is unusual in the world of literature. The story begins when protagonist, Kayu Saitoh, wakes up in an unfamiliar village. This is particularly surprising as she didn’t expect to wake up at all. Her whole life she has lived in The Village, where the custom is that in their 70th year each person is carried up The Mountain and left to die (or reach Paradise). This practice ostensibly keeps the population down and reduces strain on resources in the farming community, but it is one of many strange practices that The Village has to keep people in line.

“Everyone here is equal. Everyone’s a hag with an empty belly. We’re hungry ghosts.”

The place Kayu has woken up in is Dendera, a village built by women who, like her, were abandoned. The book follows Kayu as she resists integration with the community and is forced to work with the women to defend against incursions by a starving bear. Throughout the book Kayu learns to think for herself, something which she hadn’t had the opportunity to do in The Village.

The translation was overall very smooth and there were some really beautiful passages. I did find some expressions repetitive, especially some of Kayu’s declarations and musing about death, but I could see why they were included, as they are the main focus of the story.

I could not connect with Kayu at all as a character. I felt like she wasn’t ever fully fleshed out, and because the story is told through the lens of her narrow and rather reclusive view I didn’t have a chance to really get to know the other women in the story.

It is important to note that this is a very violent book, and there are a number of violent deaths at the hands of a bear, which is the central conflict of the book. It is vaguely alluded to in the blurb, but I think it is worth repeating as it isn’t something which is easily skipped.

Every now and then a book comes along that grabs hold of you and pulls you in, you feel as though you cannot stop turning the pages. I am not sure why Dendera was that book for me, the plot isn’t particularly gripping. But somehow the writing was so compelling that I couldn’t look away and finished it in less than 2 days.