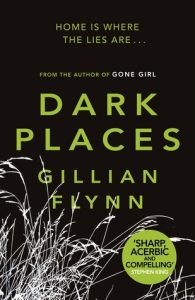 3.5 stars. A twisted thriller that highlights the complicated nature of family, loyalty, greed, and regret. The novel is filled with irredeemably flawed characters and very unpleasant women. From the opening line, “I have meanness inside me, real as an organ” there is little light in this tale.

Dark Places is unashamedly a ‘thriller’. The story follows protagonist Libby Day, who at the age of 7 gave testimony that landed he brother in prison for the murder of their mother and two sisters. When a group of ‘murder nerds’ challenge her version of events, and seemingly having nothing better to do, 30 year old Libby sets out to prove her version of events.

“She talked to me because we had the same chemicals in our blood: shame, anger, greed. Unjustified nostalgia.”

This story really grabbed me. Though I disliked all the characters the mystery of the murders had me hooked and the shifting timeline interspersed with flashbacks helped to build the tension towards the climax. The story is told mainly from Libby’s perspective in the present day, but the flashback chapters occasionally reveal other versions of events, or scenes Libby did not witness as a child. Some of the perspectives were more interesting than others but they all added to the drama.

“That’s how screwed up you are, I thought. Your idea of adulthood still comes from picturebooks.”

Flynn writes about very familiar domestic settings that become warped and twisted almost beyond recognition, only to pull readers back in with detailed observations about daily life that shake up the horror. She also writes brilliant, complex women. Dark Places is filled with women struggling against others, society or themselves, women who have tried and failed or not tried at all, women who seem exaggerated at first glance but are very real underneath. Unfortunately her male characters don’t have the same depth, and the three men central to the plot were the weakest elements of this book.

One of the most memorable quotes is: “I know a little about trying to do the right thing and fucking it up completely” . Though Libby is a truly unlikeable character, I think this showed that she grew as a person throughout the narrative. Characters don’t always have to develop into someone readers can love, or even really like, but progression and change are important in any narrative.

Overall I quite enjoyed Dark Places. It was an engaging read, and different to what I had expected after reading Gone Girl. There are thriller writers out there whose style appeals to me more, so I don’t expect to pick up another of Flynn’s novels for some time, but I don’t regret reading this at all.

Suitable for ages 17 and up. Warnings for graphic violence, murder, swearing, suicide mentions and sexual references.

**If you have read this book and wish to discuss it with others, make sure you join our (very spoilery) Dark Places discussion!**