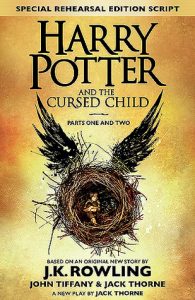 A wonderful chance to return to the world I adore, not without its issues, but still incredibly enjoyable.

First of all, this is a play. Not a novel. If you go in expecting a novel, or the experience of reading a novel you are going to be disappointed. The story is told almost entirely through dialogue, with brief introductory sections to explain changes in scene or notable emotions. The result for a reader is a fast paced read with limited atmosphere and emotion. Which makes perfect sense, because when viewed in its intended format the actors through their tone, gestures, expressions and musical accompaniment create all of those things. So I refuse to rate this book/script on the basis of readability, because simply put, it’s a script, not a novel.

Characters: It was a pleasure to have some better content than the epilogue of Deathly Hallows to understand where Harry, Ron and Hermione have got to since Hogwarts. I loved all their careers and felt like the dialogue was true to older versions of their personalities. Harry is still impulsive and quite to anger and leaps to the defensive, Ron is still a joker with a good heart, and Hermione is still the voice of reason trying to play peacemaker and keep the other two in line.

I also loved getting to know Albus and Scorpius. The latter really stole the show, his kindhearted nerdy-ness totally won me over, and his lines account for more than half of my highlighted notes. The addition of Draco was also welcome. I’ll have to wait to see it live, but aside from a rather obsessive focus on one detail and a specific way to solve it, I was glad to see his character developed and matured. I felt like he finally got the ark he deserved.

Plot: This was the most disappointing element overall, but when I keep in mind the format some of the plot choices become easier to understand. Plot elements which reminded me strongly of various fan-fiction tropes either make a visual point or make characters motivations clear very quickly (ie. I want my parent/s approval so I will do x).

In a novel I would judge more harshly, but in this case I think I am happy to overlook most of my issues, because I enjoyed the themes that are explored: friendship, family love, respect, forgiveness and regret. The story isn’t perfect, and it is not what a lot of fans have hoped for. But I really enjoyed it, I am for the most part very happy with where the characters went, and with the new ones that were introduced. I feel like I can finally accept the epilogue as canon (which I had been denying for years because it was so awkward and abrupt), and I really do hope there is more material with Albus and Scorpius, no matter what format.

Add me a a friend on Goodreads