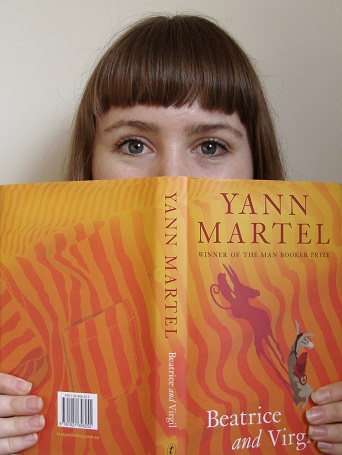 It is rare that I actually dislike a book. I enjoy reading, enjoy narratives, and enjoy various styles of writing, even if I am not always convinced by the characters or plot, or the writing is simply of poor quality, I can usually find something that redeems a book. The only redeeming element of ‘Beatrice and Virgil‘ is not enough that I can say I enjoyed it, and I would not recommend anyone read it. The book was originally given to my sister (who didn’t read it) as a gift, I decided to read it as I was intrigued by the blurb and seemed to be outside the, admittedly quite wide, scope of novels I read.
‘Beatrice and Virgil’ is a story of two layers. The first layer the is protagonist Henry a writer who wrote a very successful first novel, but is having a lot of difficulty writing his second, which he wants to be about the Holocaust. Through the fame of his first book he is contacted by a taxidermist who requests help in finishing a play he is writing. The second layer is the play, which is about a Donkey named Beatrice and a Howler monkey named Virgil. The two animals are close friends and have been driven from their homes and are travelling around a country called ‘Shirt’ which is stripy. It is eventually deduced by Henry that the play is actually about two Jewish people fleeing from persecution during the Holocaust.
The only redeeming element of this novel was a couple of sections of the ‘Beatrice and Virgil’ play, especially the scene in which Virgil describes a pear to Beatrice who has never seen or heard of one. There is something beautiful about the way this section is written. Unfortunately a couple of pages of excellent dialogue cannot redeem this book for me. The whole plot of the book is completely pretentious and the way in which it is structured feels forced, as though the author is trying desperately to convince the reader that the book is being clever.
Ultimately Yann Martel awkwardly and forcefully attempts to batter readers into believing that a subtly brilliant story has been created, by writing about an author who cannot write a book about the Holocaust and including segments of a play about the Holocaust, and thus actually writing a book about the Holocaust. What it really feels like is that Martel is simply writing about himself, not so subtly. After the huge success of his novel ‘Life of Pi‘ which won many awards, including the prestigious Man Booker Prize, Martel seems to have been beset by overwhelming pressure to produce another award winning novel. I have not read ‘Life of Pi’ and now have absolutely no desire to, but if anyone has read it and thinks it really is deserving of all the praise I may be convinced to give Martel one last chance.
beatrice and virgil, book, book review, literature, novel, review, yann martel