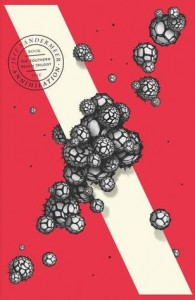 Annihilation is a very creepy novel. With a pervading atmosphere of tension it really gets under your skin. It doesn’t stand well on its own though, and I think that reading the rest of the series is going to be necessary to really appreciate the complexity of the world that VanderMeer has created.

On the surface it is a sci-fi novel about a team of four women who are sent on a military research mission into the mysterious ‘Area X’ but there is so much unknown about the narrative that it is difficult to summarise the plot of the book in any more detail. The style is that of a very freeform journal and the experience of being immersed in the head of an unreliable narrator who openly admits to structuring the content of the journal with the view that it would be read by someone makes for a very interesting experience.

This book will definitely not be for everyone. There is almost nothing resolved, there is very little action and many pages of ‘visions’ where it is unclear what is reality and what is occurring inside the mind of the protagonist. The pace also feels very slow, despite the book only being 195 pages long, as there is very little action, and what action there is feels distant and muted because of the way it is narrated.

That said, I really enjoy it. The pseudoscientific exploration of Area X fit my mood, and the underlying tension and feeling of unease about the whole thing kept me engaged. I particularly liked that none of the characters had names. The protagonist is known only as the Biologist, and her companions the Anthropologist, the Psychologist and the Surveyor, are described in little more detail than their job titles. This adds to the impersonal, detached feel of the story, and raises so many questions about who those women were and what their motivations for volunteering for the mission might have been.

The style of the book as a journal written by a scientist really fascinated me, and I felt that the tone was just right. In part it reminded me of World War Z, where you are reading reports, extracts and interviews regarding events that have taken place. This felt like an extended piece of ‘evidence’ rather than a self-contained story in its own right. After reading the synopsis for book 2 in the series, which is almost twice as long, I think that this assumption might be close to the truth.

I would recommend this for fans of speculative fiction, sci-fi and perhaps even the lighter forms of horror. This is definitely a three book commitment though, and there is not a huge amount of satisfaction for curious readers if they only read the first. Suitable for ages 17 and up, simply because some of the themes are very adult, and there is some graphic violence.