Review: ‘The Adventure of the Christmas Pudding’ – Agatha Christie 1960 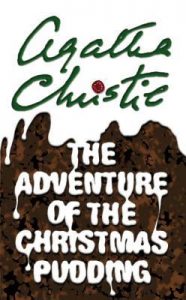 3.5 stars. A fun collection of crime mysteries solved by Hercule Poirot, with a bonus one solved by Miss Marple. Sadly only one story in the collection of 6 is actually set at Christmas time, so this wasn’t as ‘Christmassy’ as I was hoping. Overall the stories are well structured for such short crime snippets, revealing and resolving themselves in Christie’s signature dramatic style.

As with all Christie’s novels the attitudes towards servants being best when they have no discernible personality, and the general sexism throughout, bother me. I understand that those were the prevailing attitudes of the time, and Christie was certainly writing to her intended audience. Despite this these elements are emphasized or highlighted in every tale. They are not background issues or overarching themes that I am picking up on through deep analysis.

Overall, if you are looking for a Christmas crime collection to read during the holiday season there are certainly more targeted volumes available. For lovers of Poirot and Marple however these little tales from later in their fictional ‘careers’ would certainly be on interest.

1. The Adventures of the Christmas Pudding – The title tale begins with a jewellery heist, a lover, a Prince from an unspecified foreign land, and an invitation to Christmas at an English country house. The stage is set for murder, and there are only a limited set of people in the house who could have committed the crime. Of all the tales I found this one the most far-fetched, and the title seems awkwardly disconnected from the plot.

2. The Mystery of the Spanish Chest – A husband is found dead inside a large chest, where he has been hidden while his wife and closest friends dine, unknowingly, in the same room. There is jealousy, intrigue, and everyone seems to have a motivation but not the means to have done the deed.

3. The Under Dog – The longest of the collection at just under 80 pages, this story is the most complex. Like the first two tales it concerns a household, and in this the patriarch has been murdered. The police have arrested someone, but the wife of the murdered man insists they have got it wrong. Poirot stays in the house to investigate, learning about the lives and quirks of everyone inside, and to test his theories, behaving increasingly erratically. I enjoyed the story even if the ‘repressed lower classes’ themes were really out in force.

4. Four and Twenty Blackbirds – A clever little tale where food reveals the clues. An eccentric old man dines at the same restaurant twice a week on the same days at the same time. Until one week he dines on a different day, then disappears. Poirot must unravel the clues about dining habits to solve the disappearance.

5. The Dream – Probably the most irritating of the six, and certainly my least favourite. An eccentric billionaire contacts Poirot to ask for assistance in interpreting a recurring dream he has been having about committing suicide at a specific time of day. I found this whole story ridiculous and didn’t enjoy any of the characters introduced.

6. Greenshaw’s Folly – This tiny tale reminded me in some ways of Dickens’ Great Expectations, an elderly woman living in a crumbling old mansion with only a servant or two, and then the controversy of her will. Being a Miss Marple tale the style is a little different to the others in this collection, and she, as always, simply happens to be in the right place at the right time to assist with interpreting the strange events that occur.