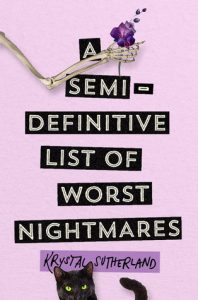 A touching, hilarious and relatable book for older teens, about depression, anxiety, facing your fears, and learning to accept help when you need it most.
17 year old Esther’s life is dominated by her semi-definitive list of 50 worst nightmares and the curse on her family to be killed by their greatest fear. Accompanied by her twin brother who is deathly afraid of the dark, her best friend who is a mute not-quite-ghost, and the boy who broke her heart when she was 8, Esther attempts to undo the curse by facing each fear on the list.
The story deftly balances nuanced conversations about serious topics like suicide, mental health, domestic violence and addiction, with first love, family bonds, YouTube fame, and pop culture references. There is a lot going on in this book, but it never feels overwhelming. Teenage life is filled with conflicts with family, uncertainty about yourself and about love, challenges with making and keeping friends, and all the other layers of life.

Though there are ghosts, curses, and Death as a character, this book is a contemporary novel. The fantasy elements are all either a product of the protagonist’s overactive imagination or left open for readers to decide. The setting is in a small-ish costal town in America, which conveniently has an abandoned hospital, cliffs for jumping off into the sea, and various other fear-related locations – all of which are visited with no adult supervision, and only one stunt attracts police attention. Given the author is Australian I assumed the setting was in Australia. It only became clear it was in America about halfway through which I guess goes to show that much of the teen experience is interchangeable culturally, or perhaps that I have read far too much American YA and it is influencing my perspective on Australian culture.

Sutherland weaves metal health issues in various forms throughout the novel, but they are never the only thing that defines a character, nor is there just one character who suffers in isolation. This approach to addressing the complexities and diverse ways in which mental health challenges people regardless of age or background is very much needed in YA. It’s rare to find a book that deals with multiple different anxiety disorders, depression, and addiction in a single book, but I was very glad to see that each was explored well. The only issue I had was regarding the treatment of Esther’s mother’s gambling addiction, I felt that given the severity of it the resolution could have been a little more nuanced.

I really enjoyed A Semi-Difinitive List of Worst Nightmares, it’s a funny, touching story filled with memorable characters and big issues. Sutherland is definitely an author whose work I will be looking out for.

Suitable for readers comfortable with violence; it includes self-harm, a suicide attempt by a main character, and physical abuse of a child by a parent.