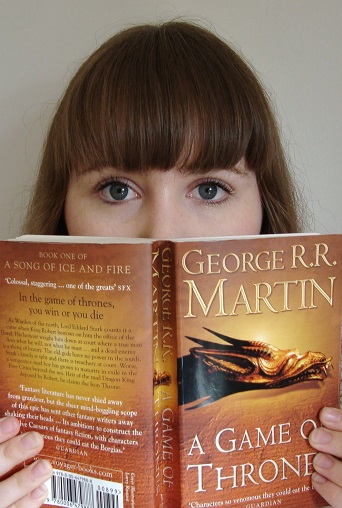 I have jumped on the ‘Game of Thrones‘ bandwagon very late for someone who considers herself an avid fantasy reader (Especially considering it has been around since 1996!). Somehow ‘A Song of Ice and Fire‘ slipped under my radar the past few years, and when I finally got around to reading the first book in the series over the Christmas break I couldn’t stop berating myself for not picking it up sooner.
George R. R. Martin has a seriously impressive talent for weaving a web of political intrigue, and the writing skill to pull off an incredibly complex series of relationships without overwhelming readers. Martin’s setting for the series is very ambitious, more so than many standard works of fantasy fiction, but because of this a sense of place becomes integral to the development of many characters, relationships and conflicts.
This is probably my shortest review to date, but I really was a bit overwhelmed by this book. I would recommend it for just about anyone, even people who are not normally interested in fantasy. ‘A Game of Thrones’ does not have a strong emphasis on many of the ‘traditional’ fantasy staples such as magic, which makes it a bit more accessible.
‘When you play a Game of Thrones, you win or you die’ is the catchphrase of the story and it is applied in a satisfyingly ruthless fashion.
book, book review, fantasy, game of thrones, george r r martin, magic, novel, review, series