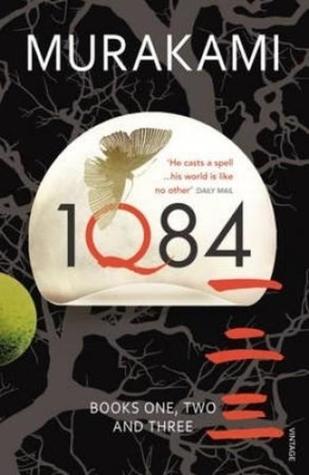 Note: This review is for the entire trilogy. Another exploration of isolation and loneliness, overlaid this time with power struggles from Japan’s most famous novelist. Science fiction and fantasy blend together as characters work their way through alternate realities while trying to unravel -or overcome- bizarre supernatural occurrences. It’s exactly the style and content that fans have come to expect from Murakami, however it’s not my favourite of his novels. The first two books were terrific, but the final book left a lot to be desired.

The plot centres around two protagonists, alternating in point of view between them from chapter to chapter. Aomame is a fitness instructor and personal trainer in her mid twenties who is leading a secret double life ridding the world of men whose violence is unforgivable. Tengo is a part-time mathematics teacher and aspiring novelist of the same age. Like Aomame, it is his ‘side project’ which really defines him as a character, and ends up drawing him into a tangled web of intrigue.

Reading Murakami’s work always has me wishing that I had kept up with my Japanese language studies since university so I could read in the original format. That said, I found the translation smooth and eloquently rendered. In amongst the very ‘functional’ narrative style are some truly beautiful passages. My favourite quote is definitely one about the moon:

There is something so beautifully atmospheric about this quote. It evokes for me a scene of restless quiet, a detached, ambivalent kind of loneliness, which is actually a nice encapsulation of a novel in which the moon plays such a prominent role.

For the first time while reading one off Murakami’s novels I noticed his emphasis on the minutia of daily life. There were frequent descriptions of exactly what characters did, especially around food preparation and dining, or exercise and free time. Most authors would omit these, or leave them as ‘Tengo prepared and ate a simple dinner’ rather than giving a dish-by-dish description of the meal and the cooking process. By book 3 I was a bit sick of this literary device, but in the first book at least I found it a pleasant break from the weird and wonderful things happening around the characters, as it anchored them in reality. This is apparently one of Murakami’s signatures, as a bit of digging revealed it is present throughout his work and that it really divides readers. This did make me wonder if he is angling for a cookbook deal, but I should leave speculation on that front alone.

Murakami’s novels often seem to have elements which explore sexual desire, and elements of particularly brutal violence, but I think this is the first time I have seen the two in concert in one of his novels. To be honest I found some of the content quite confronting, especially some of the discussions about attitudes towards sexual violence. But perhaps that is the point? A lot of this novel seemed to be poking different issues to see what might emerge and never fully exploring any of the resulting chaos. I was glad that Aomame as a character acted as a focal point for many of the power struggles between genders, as her unflinching viewpoint was refreshing.

Overall this was an enjoyable read, and I certainly don’t begrudge the 1100 or so pages it took to get through this trilogy. For me the most disappointing thing was that the third book felt completely out of sync with the first two, and didn’t deliver any clear resolution to a number of key plot points.

Suitable for ages 17 and up, for violence and sexual content.