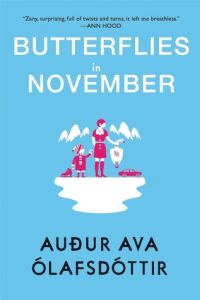 An incredibly strange novel in which a fortune teller’s predictions come true and not much else happens. I really wanted to like Butterflies in November, it is a novel translated into English from Icelandic, and written by a female author, both things I am trying to read more of. But the disjointed narrative style and the lack of resolution of any plot lines made it an unsatisfying read.

The narrator and protagonist is a thirty-ish year old woman, who beings the novel married, childless and spending time in the arms of her divorced lover. Though most of those things have changed completely by the end of the story, they are not the fulcrum around which it hinges. The plot basically consists of flashbacks to her childhood Summers in Eastern Iceland, and the present day, in which through a series of rather random occurrences she finds herself caring for a child and going on a roadtrip around Iceland.

The plot is bizarre. It is almost completely revealed in a fortune teller’s prediction at the start of the novel, and then filled with strange diversions, oddly specific details about places and people, and jumps in time and location which are not delineated in any way. It also ends abruptly, and then is followed by 47 recipes, taken from the text, including ‘Undrinkable coffee’. Oddly enough I found the amusing notes with the recipes more amusing than most of the rest of the story.

This novel is a good example of an unreliable narrator, as you are never sure from one paragraph to the next whether something actually happened, was imagined, or occurred in a dream. In some cases it is self-referential, with quotes like “Or perhaps he doesn’t actually say that; in fact it’s fairly unlikely in this setting, right in the middle of cooking, that he would have said something like that…”

There were a few interesting insights into life in Iceland, and descriptions of the countryside which I enjoyed. But beyond that I can’t really recommend this novel unless you have a particular love for this detached style of storytelling. I can see how it would appeal to some readers, it does sweep you along, and everything remains so mysterious you don’t feel the need to tie yourself in knots trying to figure out the relationship between the flashbacks and the current day. It wasn’t an unpleasant read, just not one that appealed to me particularly.