Review: ‘We Should All be Feminists’ – Chimamanda Ngozi Adichie 2014 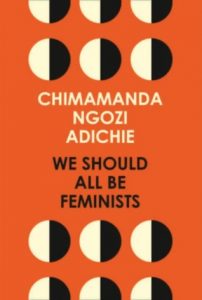 Feminism as Chimamanda Ngozi Adichie argues is not just for women, or even just for some women -upper middle class white women in developed countries, as the movement has often been criticised of representing solely – it is a call for equality for all. She poses the idea that many men (and I’d add some women) see feminism as a threat to themselves, their power, their ego, or their culture, because of the ways in which we raise our children. The narrow definitions of masculinity we teach young boys around the world limits the framework in which gender relationships develop.

“We stifle the humanity of boys… Masculinity is a hard, small cage, and we put boys inside that cage. We teach boys to be afraid of fear, of weakness, of vulnerability. We teach them to mask their true selves.”

She writes eloquently about the barriers and limitations we place on ourselves and our world with the way we define gender roles. Though there are some cultural variations in the details, there is largely consistent subjugation of women worldwide. This has not always been the case, as I recently heard Gloria Steinem speak passionately about, but that’s for another review.

“The problem with gender is that it prescribes how we should be rather than recognising how we are. Imagine how much happier we would be, how much freer to be our true individual selves, if we didn’t have the weight of gender expectations.”

Throughout this tiny volume is a passionate current of anger. Chimamanda openly acknowledges this, and challenges readers to examine why they are not angry too. I love the hope that she has for a better future, and I think that is what makes her writing so accessible. This is not righteous indignation that demands recompense, this is a voice of reason and hope asking to be heard, and asking for a fairer future for all.

“Gender as it functions today is a grave injustice. I am angry. We should all be angry… But I am also hopeful, because I believe deeply in the ability of human beings to remake themselves for the better.”

I was also very interested to read on the opening page that she believes the word ‘feminist’ and the idea of feminism is limited by stereotypes. This is something that I wholeheartedly agree with, if looked at in terms of how much of the feminist movement is presented in mainstream media, and across many social media channels. I have called myself a feminist as long as I have known the word, and identified with the sentiments long before that. I have also never felt the need to defend myself as a feminist. Both of these things are markers of both my relatively privileged upbringing, and the privilege inherent in my life, but neither are things that I take for granted. My version or vision for feminism is closely aligned with Chimamanda’s even if my experience of gender politics has been vastly different.

At 48 pages “We Should All Be Feminists” isn’t going to change your life, but it might just make you think. For as Chimamanda closes; “All of us, women and men, must do better.”