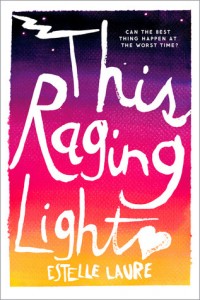 A bland YA contemporary, combining a love story and family drama, with more tropes than I could count. This novel was a disappointment for me on many levels, and I just couldn’t emotionally connect with the characters in any way, so it left me feeling flat.

The story follows Lucille, a 17 year old who is trying to look after her younger sister after her mother doesn’t return from a ‘break’ and her father is locked up in a psychiatric hospital. The main tension in the novel initially appears to be Lucielle and her sister Wren’s attempts to convince friends, neighbours and teachers that they are not alone at home. They hope to hold out until Lucille turns 18 and could be considered an adult taking care of her sister. Then financial issues are introduced as Lucielle accepts that her mother is not coming back any time soon, and so she finds a job at a local restaurant where she is pressured into dressing like a wannabe stripper. Strangely this job is not raised as problematic at all by any of the characters.

On top of all this drama, Lucielle’s infatuation with her best friend Eden’s twin brother Digby is also introduced, which has to be one of the most painfully over-used stereotypes in YA fiction. Finally, as if there weren’t already enough plot points, at about two thirds of the way through Eden and Lucielle’s relationship suddenly disintegrates, even more suddenly repairs after a few chapters of angst, and then has one of the most bizarre pseudo-twists that I have ever experienced in a novel.

If it wasn’t already obvious, this book had me asking myself what on earth the author was trying to say. There are simply too many different narrative threads in this book, that don’t link together at all, and as a reader I was left feeling let down as not one of them has a satisfying conclusion.

The romance between Digby and Lucille could have been the saving grace for this novel, but it was simply too one dimensional. There was no chemistry between Digby and Lucille, and the cheating that takes place is once again, hardly raised as problematic. This is a perfect example of where the author should have picked one thing to work through. There could have been at least 3 novels in here:

I can’t in good faith recommend this book to anyone. Because of the themes and language in theory this book would be suitable for readers aged 14 and up, but there are so many better examples of this genre that unless the premise really intrigues you I would give this a miss.