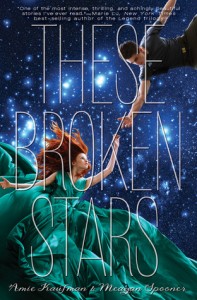 These Broken Stars by Amie Kaufman

My rating: 2.5 stars. Heavy on the love story, light on the science fiction. This novel would be perfect if you’ve never read a sci-fi novel before and just want to test the waters without too much talk about technology or other elements typical to sci-fi.

The plot follows Lilac, only daughter of the most wealthy and powerful man in the galaxy, and Tarver a soldier who has risen to the rank of Major at a very young age through heroics. After a disaster on board the spaceship they are travelling on they find themselves stranded, alone on an unknown planet.

I’m definitely in the minority in my views on this book, but it just didn’t appeal to me at all. The main characters have so few defining personality traits I would describe them as the poet/soldier and the princess/mechanic and that pretty much sums up their complexity. I found the world they crash land onto bland, and the twists hinted at too heavily to really be twists for me.

The most interesting part of this book was the last quarter, when a few things started to happen, but that couldn’t redeem the whole novel for me. Overall the language and writing style was quite pleasant, but the dialogue left a lot to be desired. In places I read it out loud, omitting the internal dialogue that was happening in the protagonist’s head, and it was so sparse it was hard to believe it was even a conversation. Yet if you read the internal dialogue it was a moment of deep and profound understanding between them as they gazed into each other’s eyes.

I’m sure that there are lots of readers who will connect with this story, of a misunderstood girl being stuck in the company of the only (or second) boy who has ever shown any interest in her for her own sake. There are so many of these perfect-on-the-outside by misfit-on-the-inside stories for teens, and this is not a bad example of one. In fact, it has some positive messages about morality and integrity, and I would be comfortable with recommending it to mid teen readers – though it wouldn’t be my first choice.

This book left me feeling very underwhelmed, and rather disappointed given how much I enjoyed Illuminae. Suitable for ages 14 and up.