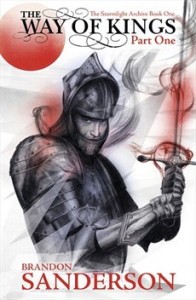 So, I tend to exaggerate. A lot. And I use hyperbole, also a lot. So when I say something is ‘the greatest x ever’, you should probably take it with a grain of salt. Yes I enjoyed whatever ‘x’ was, but surely it can’t be the greatest, I mean there are so many other ‘x’ things out there.

Way of Kings by Brandon Sanderson makes me wish I didn’t lean on that ‘exaggerate everything’ button so heavily, because maybe that way more people would believe me when I say that this is the best example of worldbuilding I’ve ever read. And before you ask, yes I’ve read Lord of the Rings. Sanderson has a way of making the absurd and fantastical seem so normal and mundane that it comes as some surprise when I walk outside (hello sun, it’s been a while) and notice there aren’t any eels floating through the air, or any crabs scuttling across the asphalt. The world Sanderson has built feels like a beloved work of art, the result of years of tireless effort, and taken on its own this book demands praise. But that’s not all Sanderson has given us.

Way of Kings is Game of Thrones with a liberal dose of hope. Where Martin twists the knife deeper into his character’s backs with an almost sadistic glee, Sanderson shows us that the world is worth saving, that these people are worth helping, and that maybe there is hope for a better future. We have Kaladin, squad leader-turned-slave-turned-slave leader, who grapples with his own despair and hatred for the nobility as he tries and fails to escape the lessons his father taught him. We have Shallan, a desperate noblewoman who is struggling to come to terms with what she needs to do to save her failing house. We have Dalinar, a once-bloodthirsty highprince who is suffering from night visions telling him of what he must do to save his people. Three characters, three struggles. each struggle going contrary to their very natures. And in amongst those central characters there are others, too, who make only the briefest of appearances but are so well-rounded and entertaining that you’re left wondering why they aren’t a central character as well.

But all I’m giving you is praise, and despite Way of Kings being well-deserving of it, surely there’s something I can fault it for? Some flaw, some drawback, something that will shave off a half-star or more? Honestly… this is a struggle. On the one hand I could say the world-building is a little too thick at places, but when it serves the purposes of the story, can I really complain? I’m not a huge fan of switching perspectives, but Sanderson has pulled it off admirably. The magic in this story is a bit too neat and tidy, though there are elements hinted at which suggest spellusers in this world know less about magic than they assume.

Sanderson has written a masterpiece worthy of high praise. That’s really all I can say on the matter. I rate it an emphatic 5 stars, and I’m already diving into the second book (which is technically the second half of the first book). Read it, love it, and let’s talk about it!