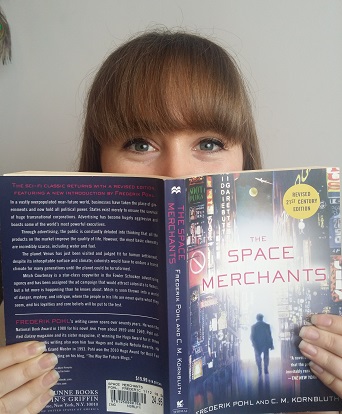 I loved this book, and don’t know why I put off writing this review for so long. I finished this novel in Feb 2012, and it still comes to mind from time to time either when I am reading other Dystopian novels, or when I feel like I am just a ‘space merchant’ too.

It is incredible to realise that this book was conceived during World War 2, and yet it still reads and resonates in a way which most books from that era don’t. This book has so much in common with contemporary books like Jennifer Government and Wind Up Girl, because of it’s cynicism about the world of marketing.

The plot follows Star Class copy writer Courtneay, who is excellent at his job of convincing people they want something without them realizing they have been convinced.

Courtneay’s world is a scary one, ruled by ‘Sales’, where the world is hugely over populated and almost uninhabitable, with very little fuel.or fresh water. Aside from limiting fuel, using pedal cars and rationing water nothing has been done to adapt to the realities of the situation. In fact the opposite has occurred, with Ad companies controlling the way people live and purchase meaningless gadgets, and getting them (literally) addicted to branded products.

When you throw into the mix the discovery that Venus could be made habitable, and an extremist group advocating population control and recreation of biodiversity you have a very exciting plot which has parallels with many modern day debates.

This book is a must-read for dystopian fans, as it captures so much and has aged so well. Pohl was a visionary.