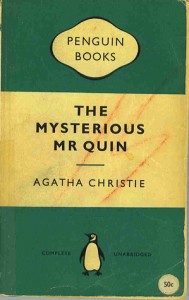 Mildly entertaining collection of short mysteries. I don’t believe this is Agatha Christie’s best work but there are enough enjoyable stories mixed in with misses that it wasn’t altogether a loss.

Unlike the more famous Miss Marple and Hercule Poirot mysteries the protagonist in these stories is not an investigator/detective, or even looking for mysteries to solve. This premise begins to wear fairly thin by the end of the book. Though I imagine that if you were reading them as they were originally published, years apart, the repetition of stumbling on mysteries might have been endearing rather than irritating.

Mr Satterthwaite is a rich old man who has never experienced romance or adventures outside his comfortable lifestyle. He is a self-acknowledged snob, who prefers to socialise with the ‘cream’ of society and frequently looks down on the ‘lower’ classes. Because the stories are so short he is a fairly one dimensional character, or perhaps if I was being kind I could say enigmatic. My favourite moment was the revelation that he had once planned to propose to a woman, but he missed his chance as she married another. I think this kind of tragic figure rarely appears in such an innocent form in modern literature, and it was a change to read something like this.

In the foreword of my edition Christie writes that her favourite stories were: World’s End, The Man from the Sea, and Harlequin Lane. Of those I enjoyed the first with its sense of impending doom. It had the feeling of being a stage show with a limited cast of characters gathered around a table to resolve a crime accidentally through conversation. The second I enjoyed right up until the very last page where abuse was justified as ‘too much love’ and I just couldn’t abide it. Harlequin Lane was just strange, and really burred the line between real/surreal which I didn’t enjoy as much as the other stories that were more firmly grounded in reality.

My main issues with this book were all around representations of women. They seemed to either be tragic figures destined to be rescued (by a man or by death), or twisted creatures plagued by vice. As I mentioned above, I was really uncomfortable with the justification of quite intense abuse, but equally the female characters who died or were killed after they did something wrong wasn’t particularly pleasant either. I know that the stories were written in the 1920’s and first published as a collection in 1930, so they are a reflection of their era, but that didn’t make me any less uncomfortable with some of the content.

I’ll definitely read more Agatha Christie, but I probably wouldn’t pick up any more of the Mr Quin tales.

Bonus:
I wrote a quick sentence about each of the stories, to remind myself of them when I participate in the Maidens of Murder discussion at the end of the month.

1. The Coming of Mr Quin: Odd but not unpleasant.
2. The Shadow on the Glass: Enjoyed it, a twisted set of desires in barely 20 pages.
3. At the Bells & Motley: Dull. There was a key piece of information revealed too late and the connection was tenuous.
4. The Sign in the Sky: Quite nice, turning the superstitious into a factual clue. Though it dis have me starting to suspect Mr Quin was some kind of hallucination.
5. The Soul of the Croupier: Read like a little story from the back of a women’s gossip magazine!
6. The Man from the Sea: Was going so well, I was intrigued and though I figured out the twist the story was quite lovely. But to end it like that? With a weird justification for abuse? That really brought the whole tale down for me.
7. The Voice in the Dark: A great example of Christie playing with the ‘spiritualism’ trends and gently mocking them. I suspected a different twist and this was the first one that actually surprised me. Though the more I think about it the more ludicrous it seems. And the ending was so annoying. No possibility of an actual resolution or punishment.
8. The Face of Helen. Not a fan.
9. The Dead Harlequin: Probably my favourite story so far, though the artist character annoyed me.
10. The Bird with the Broken Wing: The first story where I didn’t guess the murderer/twist, but the end spoiled a decent story because it lacked motive.
11. The World’s End: Such a clever little story.
12. Harlequin’s Lane: What did I just read?! That last story was all over the place, and leaves me questioning the entire collection.