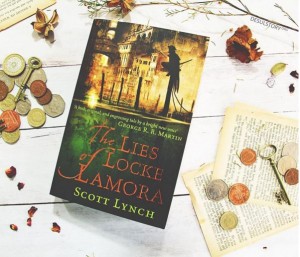 Scott LYNCH! How dare you play with my emotions like this! But before we get into all that…

Today’s featured photo is by the lovely Gemma from @GemKarita whose photo is both beautiful and incorporated the rather tricky #bookandkey challenge! This weeks challenge is, if anything, even harder but I know you are up for it!

REMINDER: This post will contain spoilers for the Prologue & Book I & Book II. You have been warned!

Favourite quote:
‘Chains used to claim that there’s no freedom quite like the freedom of being constantly underestimated’

What a place to end the section?! Lynch definitely knows how to build tension, and there are so many layers to my fear for Locke and the other Bastards, that I’m only pausing my reading long enough to write this post before I dive right back in. I definitely found the pace of this section a little slower than the first, as the deception of Don Salvara becomes slightly pointless in the face of greater danger.

I think Locke’s choice to continue with the con, speaks directly to the idea that “Other than financing further theft, the Gentleman Bastards really had no idea what they were eventually going to do with it all”. None of the Bastards have any particularly strong motivators for what they do, especially without Chains as the father figure they are seeking approval from, and that lack of purpose is what I see as underpinning all the things which are starting to go wrong for Locke. In this section we see the Bastards lose sight of their role and significance in the web of Camorr, and I think they are making the mistake of underestimating the motivations that others (like the Grey King) have, and the capacity they have for violence. This is such an unusual position to see a character in, usually in fantasy we see the master schemer or the reluctant hero swept up in circumstance. Locke has the chance to be both, if only he can get out of that barrel alive!

Before I leave you to discuss I want to highlight one of my favourite moments from this section (which was most definitely not the heartbreak I felt when we learnt of Nazca’s death so suddenly!! WHY?!), I think it really highlights Lynch’s flair for the dramatic, the humorous & for building tension. During a flashback Chains is taking a deadly serious tone with young Locke and explaining in great detail all the reasons Bondsmagi are not to be messed with, under any circumstance. Turn the page, jump forward in time, and the first phrase out of Lockes smart mouth when he meets one for the first time is ‘Nice bird, asshole’. Deliberately antagonistic, always thinking he has the upper hand, this characterization makes me laugh, and cringe, as he doesn’t seem to learn his lesson – and is throttled by the Falconer again not 30 pages later.

Can’t wait to hear your thoughts on this section, there was so much happening, and so much to come!

Discussion questions:
(Feel free to reply to each other, and to ignore my questions if you have something else to talk about!)
1. How did this section make you feel?
2. What are you most afraid of in the coming section?
3. Do you think we have already met the Grey King? If so, who do you think he is? (Locke hinted at recognition in their first meeting, but it may have been a red herring!)
4. How do you feel about the number of female characters?

Photo Challenge: #bookandbird because “Nice bird, asshole” was too good to resist

Remember to use the tag #BabblingBooksRA on your photos, and feel free to tag me @babblingbooks in your captions. I’ll be reviewing the tag throughout the week and choosing my favourite to be featured next week.