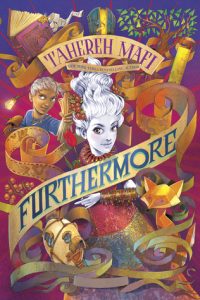 4 stars (adult enjoyment) 5 stars (Middle Grade rating). A sweet, colourful read, perfect for confident readers aged 9 and up, or teens and adults young-at-heart. Dive into the strange and surprising worlds of Furthermore and Ferenwood, where there is both danger and wonder in equal measure.

Protagonist Alice is about to turn 12 years old, and she can’t wait to wow the community that has excluded her with her talent at the annual coming-of-age performance. A successful performance might lead to a quest, and a quest might lead to her dear father who has been missing for years. But Alice soon learns that life is not as predictable as we might hope, especially in a world filled with colourful magic, and all manner of opportunities and barriers are thrown her way. The book follows Alice’s attempts to find her father but also to find herself.

“Alice was an odd girl, even for Ferenwood, where the sun occasionally rained and the colors were brighter than usual and magic was as common as a frowning parent.”

Though there is nothing especially unique about the quest narrative, the world that Mafi has built is vivid and fantastical. I was strongly reminded of Narnia, the Magic Faraway Tree, and Wonderland, and it came as no surprise to see that the books of Mafi’s childhood were her inspiration for the setting. She has perfectly captured the oddity of the adult world from a child’s perspective and translated it into a fictional realm.

The language of Furthermore is playful, joking with readers and inviting them into the story. I adored this narrative style. It perfectly suited the mood of the book, which often felt like a favourite relative was narrating it, mixing humour and insight, jokes and advice.

Mixed throughout the narrative were some beautiful quotes about strength, hope and being yourself. These moments were, for me, what elevated it from a book suitable just for middle grade readers to a narrative that was appealing regardless of age. The struggles we have with ourselves are often far greater than those the world throws at us, and one can never have too much resilience for the challenges of life.

“She’d decided long ago that life was a long journey. She would be strong and she would be weak, and both would be okay.”

I really loved Alice’s rivalry that grew to friendship with Oliver. The relationship between them wasn’t always easy to read, as they kept things from each other and hurt each other’s feelings more than once. But I think it was really important that they were able to admit that their pride had been hurt, feel shame for their behaviour and then apologise to each other and be friends again. Those kinds of hurts and betrayals by friends over things big and small litter everyone’s childhood, and being able to step up and admit when you were wrong is so important in being kind to others.

“Why must you look like the rest of us? Why do you have to be the one to change? Change the way we see. Don’t change the way you are.”

Last of all, I loved the way looking physically different and acting outside of the lines society sets as ‘normal’ was presented. Alice experiences discrimination both real and imagined, and the story teaches her to be proud of who she is, and that no matter her difference she is worthy. The story also gently reminds readers not to judge others and to be inclusive of those you might think are different to yourself. The story wasn’t overly preachy on these issues, but they are threaded throughout.

“Alice knew that being different would always be difficult; she knew that there was no magic that would erase narrow-mindedness or iron out the inequities in life. But Alice was also beginning to learn that life was never lived in absolutes. People would both love her and rebuff her; they would show both kindness and prejudice. The simple truth was that Alice would always be different—but to be different was to be extraordinary, and to be extraordinary was an adventure. It no longer mattered how the world saw her; what mattered was how Alice saw herself.”

I love this book, and recommend it to anyone looking for a whimsical fantasy read with a delightful setting and inclusive messages.