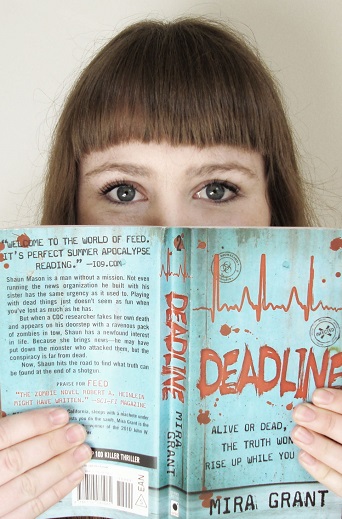 ‘Deadline’ is the second novel in the ‘Newsflesh Trilogy‘ of zombie novels by Mira Grant, and if you haven’t already read ‘Feed‘ then I suggest you start there before diving into ‘Deadline’.

If I had written this post last night at 2am when I finished ‘Deadline’ it would have consisted of “No way, she [Grant] didn’t, oh no she didn’t, ah” and so-on, interspersed with mutterings about “too many cliffhangers for one person to handle” and finished off with “best book I have read all year”. However, I have a nights sleep and a few hours of perspective and though those sentiments are still valid I have toned them down a little.

Anyone who has read my original review of ‘Feed’ will realise that I was totally smitten. I ordered ‘Deadline’ almost immediately after finishing ‘Feed’, and intended to savour it over a few weeks reading. That didn’t happen. Despite having work and social commitments I still finished ‘Deadline’ in less than 24 hours. I enjoyed this novel immensely, despite it being missing some of the characteristics which made me love ‘Feed’. By focusing only on main character Shaun, rather than the original shifting perspective, the tone of the novel was quite different. The other shift was away from what I saw as using zombies as an allegory for various other ‘real-world’ issues manipulated to control population through fear. While the theme of control through fear is still prominent, as the storyline moves deeper into determining the specifics of the manipulation it becomes less and less of an allegory and more of a whole-world-conspiracy story. While I did miss the focus on the truth, integrity and reporting of ‘Feed’, as long as the next book can void the many whole-world-conspiracy clichés I think it will still be a great read.

There were a few irritating points throughout ‘Deadline’, beginning with the repetition of the opening scene. While I understand that opening with a similar [read: almost identical] scene is a stylistic decision I think it was poorly executed. In addition, the repetition of some phrases and actions throughout the novel became irritating. This included constantly explaining how blood-testing units operate and their results, and mentioning whether or not the members of the group wanted snacks when someone went to the kitchen. The second one may sound silly, but no one EVER wanted anything, and yet every time a character goes to the kitchen this is repeated, and since a large portion of the book has them holed up in a house, it happens fairly often.

One of the biggest improvements in ‘Deadline’ was that the entire book was relevant to the plot and contributed to both building suspense and characters, rather than the dragging, irrelevant first section of ‘Feed’. This was a major plus, and did not mean the sacrifice of the wonderfully unforgiving nature of the plot. Grant has no qualms about killing off main characters, or inflicting mental trauma on others, and this really adds to the overall tension.

I thoroughly enjoyed reading this book, and highly recommend the series, especially if you like zombies. I’m off to play Left 4 Dead 2, and pretend I’m Georgia Mason, wish me luck.