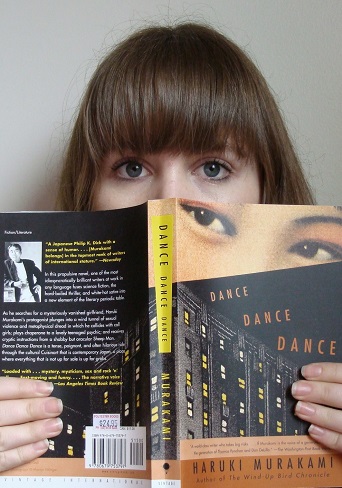 Murakami‘s novels are so unusual I find them very hard to describe. He is definitely one of my favourite authors, for a number of reasons relating to his style of storytelling, but especially because I read two of his books while travelling in Japan alone earlier this year and they became a big part of my journey. Thus far I have read (in this order); Norwegian Wood (The movie of which I saw recently and enjoyed), The Wind Up Bird Chronicle, A Wild Sheep Chase, and today’s review Dance, Dance, Dance. All four feature a Japanese male protagonist who deals with love, loss, loneliness, rejection, dislocation and friendship. Feelings of isolation and despair are pervasive in all four books, yet somehow they are not depressing.
But for today we will focus on ‘Dance, Dance, Dance’. This is the sequel to ‘A Wild Sheep Chase’, something I did not realise when I bought the book, but was immediately clear once I began reading. I think you could read ‘Dance, Dance, Dance’ alone, however reading ‘A Wild Sheep Chase’ beforehand would definitely help to make sense of some of the more bizarre supernatural elements.
I honestly believe that the people who write the blurbs on the back of books must not have read the books they are writing about (This is a long running bugbear of mine). The same goes for many reviewers, or the people who choose which quotes go onto book covers. With ‘Dance, Dance, Dance’ this was especially irritating, as the blurb and some of the quotes (in my opinion, feel free to correct me) completely misrepresent Murakami’s work. Dance, Dance, Dance, is not science fiction. Murakami is not ‘imagining the future’ as one reviewer mentioned, the book is set in the late 1980’s in Japan, a real time, and in real places. There are real celebrities mentioned, many many real songs from the correct periods mentioned, and references to real events such as the Vietnam war, World War 2, student riots in Japanese universities etc. None of these events are ‘re-imagined’ and the world is not an alternate universe, a dystopian or indeed utopian future. The closest thing to ‘science fiction’ are the supernatural elements I mentioned before. However they are written in such a way that they could be explained as vivid dreams revealing the (unnamed) protagonist’s subconscious. The main supernatural character ‘Sheep Man’ is described as being a part of the protagonist, and the supernatural worlds visited are described as belonging to the protagonist (though a hotel receptionist also accesses one). Another main character described by the blurb as a ‘lovely teenage psychic’ specifically says she is not a psychic, though he abilities add a strong element of the metaphysical to the novel, and I think you could call her an empath.
Overall, I really enjoyed this book. I love the way Murakami writes (there are a couple of quotes below to demonstrate), and the story like that is a slow building detective novel or crime drama. As more and more information comes to light and more and more people become implicated, the original investigation reveals many related crimes, and ultimately there is a resolution and a mostly happy ending.
[With regards to advances in phone communication] “But no matter how advanced the systems, no matter how precise, unless we have the will to communicate, there’s no connection” (p126)
[Dick North is a character with one arm, who, in the preceding chapter, died] “The house was still haunted by Dick North’s presence. Dick North was still inside me as well. I remembered his smile, his surprised look when I asked him if he used his feet to slice bread. Interesting man. He’d come more alive since his death.” (p335)
book, book review, dance dance dance, japanese, literature, murakami, novel, review