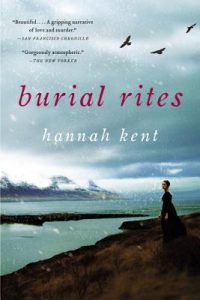 Intimate, atmospheric and vividly told, Burial Rites is more than worthy of all the praise it has received. A powerful and emotional narrative woven from historical details that could have been dry and dusty in another author’s hands. Hannah Kent has written something special, a story so deeply rooted in the landscape of Iceland that you cannot help but be moved by it.

“To know what a person has done, and to know who a person is, are very different things.”

Burial Rites is, simply put, a historical novel about Agnes Magnusdottir, the last woman to be executed in Iceland, in 1829. The narrative covers the last few months of her life, in custody with a farming family, and includes flashbacks and reflections on her whole life. What this brief synopsis fails to capture is the deeply personal and intimate nature of the way in which the story is told. The tale is as fragmented as Agnus, splintered into complex parts, the surface presented to the world a product of what is underneath, the accumulated tragedies of life as a woman in poverty.

“They see I’ve got a head on my shoulders, and believe a thinking woman cannot be trusted.”

The idea of freedom flows through the story, always just out of reach. Agnes is imprisoned from the moment the we read the first line “They said I must die”. Even in this sentence Agnes has no power, she lacks freedom not just because of the crime of which she has been accused, but in every way from the moment of her birth she has been a prisoner of a world who saw her as something lesser. As her story unfolds, what emerges is a reflection on love and hope through adversity, and the crushing injustice that Agnes does not suffer alone.

The two greatest accomplishments of this novel are the characters and the landscape. There is a whole cast of characters who each have so many dimensions they feel fully realised. As a reader it is impossible to tell which are actual historical figures and which were invented to service the story, they all feel as though they could be someone’s ancestors, that their lives continued on after Agnes’s story ends, and might still be living on in some small way today.

The young assistant Reverend who is tasked with ‘bringing the murderess to God’ was a particular favourite of mine. His fears and hopes and beliefs were so wonderfully balanced. His naivete about the world and the lives of women, coupled with his kindness, earnestness and self-doubt, created this wonderful counterpoint to the world-weary Agnes, without straying into caricature.

The Icelandic landscape is integral to the success of Burial Rites, just as it is integral to the lives of those who live there. The harsh, unforgiving climate shapes the lives and attitudes of the people throughout the novel, giving weight and context to their beliefs. Travel is hard, impossible for much of the year, so communities are tightly bound by physical and social necessity. A pauper or work-maid like Agnes cannot leave a job she dislikes or suffers abuse at, not just because small communities talk, and work is difficult to find, but because leaving in Winter would mean death in the snow before reaching the next farm. The weather and the unforgiving land, heighten every challenge experiences throughout the lives of all the characters. The steep cliffs, crashing waves, barren valleys and endless hills of Iceland loom over every page.

There is so much more to Burial Rites than a story about the last months of an accused murderess’s life in 19th century Iceland. There is so much depth and complexity, so much grief and rage, so much railing against the injustice of the world, that this book is beautifully compelling no matter your interests.

Trigger warnings: Descriptions of murder (stabbing/bludgeon), mentions of and implied rape (not graphic or plot focus), animal deaths, suicidal thoughts. *Note* None of these things are in any way glorified or voyeuristic in their descriptions, but they do occur. If you are particularly concerned about any of them and would like more information please ask.