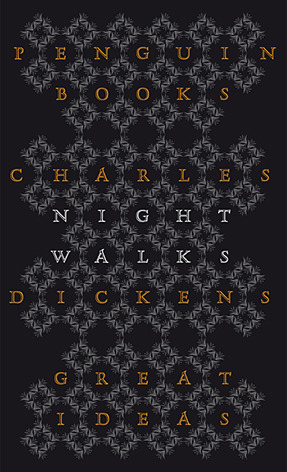 ‘Night Walks’ from the Penguin ‘Great Ideas’ collection gives a wonderful series of snapshots of life in London during the mid 1800’s. Dickens is in his element discovering injustice and vice in every corner of the city and writes passionately about his ideas for moral improvement of citizens and the role of government. It might be non-fiction, but Dickens’ way with words drew me into almost all of these short essays, and I thoroughly enjoyed the book.

1. The title story, Night Walks, is wrapped up in loneliness, the peculiar bleak loneliness that exists before dawn. In it Dickens recounts a long night spent walking the streets of London during a phase of insomnia. This story, though non-fiction, is written in a lyrical, reflective style, and you feel as though you are walking along beside him. It was my favourite of the collection.

2. Gone Astray was a sweet recollection of Dickens day lost in London as a boy of 8 or 9. His observations of the city for the perspective of a child were charming.

3. Chatham Dockyard was a rather dull (to me) ode to British ship building. It does amaze me the way Dickens appears to wander places, unquestioned or interrupted, but I suppose he has used some literary licence. This was my least favourite of the collection.

4. Wapping Workhouse was a strangely positive account of Dickens visit to a workhouse for women. I say strangely, as the ‘unChristian’ nature of workhouses is the core to his famous tale Oliver Twist, and it is strange to read him talk of workhouses with positive feeling.

5. A Small Star in the East – A thoroughly depressing account of Dickens visits to the homes of poor families in London, and to a hospital for children – mostly suffering from malnutrition. This story was completely heartbreaking.

6. On an Amateur Beat – A brief tale, with less substance than most of the others, but containing one my favourite sentences of the book; Almost a whole page long, in a single sentence Dickens wonders whether an archaeologist in the future could possibly believe that an empire such as Great Britain could be so negligent of its own poor, starving children. It sums up perfectly the tone of the whole collection, his frustration with the status quo and its disregard for the most vulnerable.

7. Betting-Shops concerns itself with the vice of gambling, and implores employers and parents to curb the vices of those in their charge. Dickens admonishes the unscrupulous betting agents who set up shop, take bets and leave before paying out. As a political essay it’s quite quaint, but the issues are (sadly) still under contention. To what extent is the government required to intervene in the lives of its citizens is the main question Dickens poses, and is not one that we have answered today.

8. Trading in Death is a rather scathing critique of ostentatious funerals, and those who seek to exacerbate and profit from the trend. In particular Dicken rails against the State Funeral of the Duke of Wellington, going so far as to include excerpts from other publications advertising rooms for rent to view the procession.

In short, this collection of short essays is heartbreaking and vivid in its insight into London in the 1800’s. Though it will not come as a surprise to any student of political history, the questions Dickens is grappling with about ‘moral decay’ are still present and debated to this day, though we might frame the in different language.