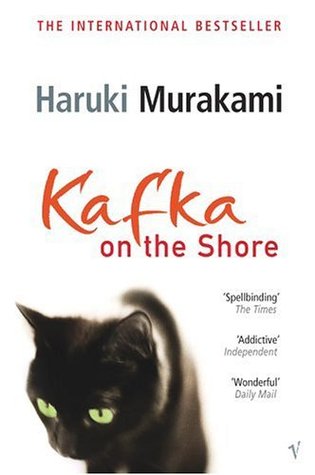 Kafka on the Shore by Haruki Murakami

Kafka on the Shore is strange, thought-provoking, and confusing, as only a Murakami novel can be. Blending magical realism, alternate history, parallel worlds, and coming-of-age, this novel covers a lot of ground in 500 odd pages. It is the 6th novel I have read by the heavy-weight of modern Japanese literature, and I am yet to be disappointed.

Kafka on the Shore follows the parallel paths of a 15 year-old runaway named Kafka, and an old man named Nakata who can talk to cats. All sorts of strange things happen to them both, from a gruesome murder, to fish and leeches falling from the sky, ghosts appearing, and stones opening portals to different worlds. The setting is modern-day Japan, overlaid with the strange blend of fantasy that Murakami weaves into so many of his stories.

There were many really thought-provoking aspects of this book. I found myself pausing to reflect on certain passages, or sections of the novel. Throughout the story characters dwell on what it is to live a fulfilling life, to regret, and to forgive, and I enjoyed exploring those possibilities along with them.

“All these millions of stars looking down on me, and I’ve never given them more than a passing thought before” p145

The sections of the book that I didn’t really enjoy, and which prevented me from giving this a 5 star rating were the really violent or gruesome scenes. I can see how they fit within the story, but I still found them really confronting and almost too much to read through on one occasion. I think the book could probably have done without these scenes being so vivid, and more could have been implied rather than shown.

This is a simple, engaging novel if you just skim the surface, and a complex novel when you read between the lines. I enjoyed being swept up into Murakami’s weird and wonderful imagination, despite the sections that I found unpleasant. I wouldn’t consider this to be my favourite of his novels, but I am glad I read it, and look forward to my next read from his extensive collection.